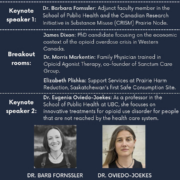 The Global Health Committee is excited to present the 2022 Global Health Conference! The theme for this year is Substance Use and Harm Reduction. The conference will run over two Saturdays – January 15th and 22nd, from 9am-12:30pm each day. We have an exciting group of experts in the field speaking with us, with keynote speakers for this day including Marie Agioritis of Moms Stop the Harm and Garth Mullins of the Crack Down Podcast! Sign-up can be found here: https://www.eventbrite.ca/e/global-health-conference-jan-22nd-tickets-231886116617. Breakout rooms run concurrently so please only sign up for one! 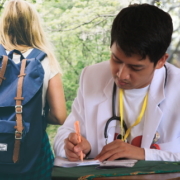 PaRx, Canada’s first national nature prescription program, has officially arrived in Saskatchewan! PaRx is an initiative of the BC Parks Foundation, driven by health-care professionals who want to improve their patients’ health by connecting them to nature. Featuring practical resources like quick tips and patient handouts, its goal is to make prescribing time in nature simple, fun and effective. Research suggests that spending time in green space boosts immune function and life expectancy, and lowers the risk of developing a host of medical conditions from heart disease to diabetes, obesity, depression and anxiety. Not only that, but people who are more connected to nature are more likely to protect it. With guest speakers Dr. Melissa Lem, Director of PaRx, as well as University of Saskatchewan medical students Brooklyn Rawlyk and Sehjal Bhargava

The non-profit charity Friends of the Saskatoon Afforestation Areas Inc. was created to preserve and restore the 326-acre Richard St. Barbe Baker Afforestation Area (RSBBAA) and the 148-acre George Genereux Urban Regional Park. Our work reinforces the 1972 City Council decision designating these afforestation areas on the western fringe of Saskatoon to “be preserved in perpetuity.”

The word recreation can be understood re-creation, reflecting the fact that being in nature is restorative for human beings. Richard St. Barbe Baker wandered into the forest near his home at age five and experienced the overwhelming beauty of nature touch his soul.

“Soon I was completely isolated in the luxuriant, tangled growth of ferns which were well above my head. In my infant mind I seemed to have entered a fairyland of my dreams. I wandered on as in a dream, all sense of time and space lost … I became intoxicated with the beauty all around me, immersed in the joyousness and exultation of feeling part of it all. I had entered the temple of the wood. I sank to the ground in a state of ecstasy; everything was intensely vivid – the call of a distant cuckoo seemed just for me … The overpowering beauty of it all entered my very being. At that moment my heart brimmed over with a sense of unspeakable thankfulness which has followed me through the years since that woodland re-birth.”

St Barbe had a life-long feeling of oneness with nature after this and this spiritual connection inspired his great achievements to protect and restore forests. He taught that trees and woodlands are intimately linked with biological, social, emotional, and spiritual well-being. In this light, he often quoted the poet Stanton Coblentz who wrote about the redwood forests “ I think but could the weary world but know communion with these spirits breathing peace, strangely a veil would lift, a light would glow, and the dark tumult of our lives would cease.”